I am organizing a review opportunity for Cutlass (Cutlass #1) and Flintlock (Cutlass #2) by Ashley Nixon. Both are Young Adult Fantasy books. Review copies are available in mobi, epub and pdf format. There is no deadline for when you have to review these books. Sign-ups are open till further notice. 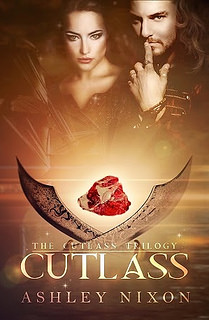 Blurb:
Notorious pirate Barren Reed has one thing on his mind: Revenge against the man who killed his father. So kidnapping his enemy’s fiancé seems a perfect plan…until he actually does it.

Larkin Lee is more than a pretty face and fiancé to a powerful man. Her fierce personality is enough to make any pirate want to push her overboard.

But when the King of the Orient comes to Barren with a task—to find the Bloodstone, a powerful gem thought only to exist in legend, Barren sees another opportunity to destroy his enemy. Together, Barren, Larkin and a crew of pirates set off to find the stone, only to discover it caused the death of Barren’s own mother and Larkin’s, too. As his strongest allies turn into his greatest enemies, and the life of the girl he kidnapped becomes more important than he ever dreamed, Barren’s quest for revenge becomes a fight to save the Orient.

You can find Cutlass on Goodreads 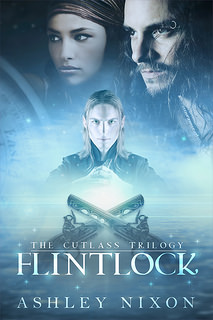 Blurb:
Barren Reed hopes to protect the Orient from his tyrant uncle, but his plans to make the King’s life a living hell aren’t supported by the Elders of the pirate community. As it stands, Barren has earned the Elders’ disdain for his carelessness, and they threaten him into exile if he makes one more mistake.

Barren’s not the only one feeling the Elders’ wrath—they don’t trust Larkin either. Worse, Barren can’t comprehend Larkin’s wish to have a relationship with her father, and the secrets she’s forced to keep create a tension that may pull them apart forever.

When the Pirates of Silver Crest begin to die, bullets laced with dark magic are to blame. With more and more of these weapons infiltrating the Underground, discovering who’s behind the dissemination is no easy feat. As fear and tension mount among the people of the Orient, Barren and his crew find themselves in a race against time to stop the spread of dark magic before the world of Mariana spirals into collapse.

You can find Flintlock on Goodreads

Ashley was born and raised in Oklahoma, where the wind really does sweep down the plains, and horses and carriages aren’t used as much as she’d like. When she’s not writing, she’s watching Pride and Prejudice (1995 version, duh), working out, or pretending she’s Sherlock Holmes. Her obsession with writing began after reading the Lord of the Rings in the eighth grade. Since then, she’s loved everything Fantasy–resulting in an unhealthy obsession with the ‘geek’ tab on Pinterest, where all things awesome go.

TMBA Corbett Tries to Write
The Hufflpuffnerdette
An ocean Glimmer