I am organizing a review opportunity for Spooks by Athena Floras. Spooks is a box set that collects 3 different books in this series, they can all be read as a standalone.

Review copies are available in e-formats and there is no deadline before when you have to review it. 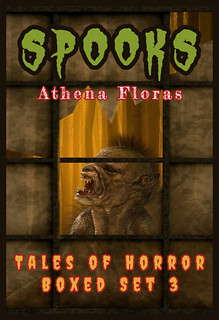 Blurb:
Three Gripping Tales Full of Horror and Suspense in One Boxed Set…

DON’T LET IT IN
Gary Penny was looking forward to this encounter for a long time. He was finally going to get a chance to get closer to Jennifer Avia, the girl who sits next to him in his English class, who he’s had a gigantic crush on ever since they were in elementary school. She is coming over to participate in a séance his big brother set up in remembrance of their cousin Aaron who died in a car accident a year ago this day.
But as the night progresses, things take a turn to the bizarre. Strange and eerie things begin to happen, making Gary question if this séance is a good idea. There’s a foreboding, assiduous feeling deep in his gut saying that they are about to open Pandora’s Box and all of hell will break loose.
Should he listen to his sixth sense or just let whatever spirit, along with Aaron, they make contact with come in?

DON’T LOOK NOW
The house on the hill has been abandoned for years. When a new family moves in, Danny Morse and his friends go to investigate.
Rumour has it the house is haunted. They are curious to see what the ghosts in the house will do to the new residences.
But what Danny and his friends discover on their trip to the top of the hill is a creepy scarecrow. It seems to follow their every move. Too spooked to stay longer and investigate, Danny and his friends head back home. Danny thinks that’s the last he’ll see of that scarecrow.
But he couldn’t be more wrong. The scarecrow has a name. It’s Harvey. And Harvey has set its hollow eyes on Danny. It has plans for him. Dangerous and evil plans. Can Danny escape Harvey’s deadly trap?

YOU NEED TO SEE IT TO BELIEVE IT
How far would you go to prove your point?
When Bo West is stalked by something so hideous and appalling in the subway tunnel one night, he can’t believe his eyes. He wonders if he imagined the dangerous encounter or if it really was real.
Obsessed with finding out the truth, he sets out with his friend Joey in search of the giant, haunting creature to prove to himself and everyone around him he isn’t crazy.
But some things are better left alone. This creature is one of these things. When Bo and Joey encounter it in the subway tunnel, everything gets out of control and they, the hunters, become the prey.
Can they safely find their way through the underground maze of tunnels before the creature finds them and finishes them off?

You can find Spooks: Tales of Horror on Goodreads

You can buy Spooks: Tales of Horror here on Amazon

Athena Floras is a wife and proud mother of three who loves to read and write suspenseful and romantic stories. When she isn’t busy being a mom, she spends her spare time in her den, totally immersing herself into the whimsical, fantastical world of fiction. She hopes the stories and characters she creates will bring readers as much pleasure and entertainment as they have her.