I am organizing a review opportunity for The Ghostcrow: A Tale of Andor by M.K. Theodoratus. The Ghostcrow is novelette, not a novel. You don’t need to have a blog to sign-up for a review opportunity, as long as you have an account for a site where you can post your review. Review copies are available in the following e-formats: mobi, epub and pdf. 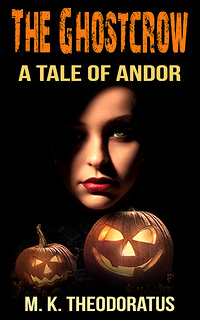 Blurb:
Seeing ghosts has plagued Dumdie Swartz since early childhood. Afraid that ghost guts might stick to her if she stepped through them, thirteen-year-old Dumdie Swartz still cringes when she encounters them. Her strange attempts to avoid spirits create a lonely life. Her sisters constantly mock her strange behavior, her parents are clueless, and her social life is zero.

Dumdie finds solace working in a shared garden with her elderly neighbor, Mr. Carson. When teens from her high school steal pumpkins from his garden, Mr. Carson is hurt during the theft, and later, dies. Dumdie’s life takes a dark turn. She learns there are stranger things than ghosts, when she senses something evil living in Kyle, one of the boys who had raided the pumpkin patch.

Kyle bullies Dumdie to scare her into silence. The more Kyle threatens her, the clearer she perceives the evil thing possessing him. Dumdie finds support in an unlikely group of girls who befriend her when she helps them with their costumes for the Pumpkin festival. During the festival, Dumdie’s fears explode when the thing possessing Kyle decides it wants to possess her.

You can find The Ghostcrow on Goodreads

Note from the author:
I prefer to write short stories and novelettes while I’m exploring a new world. For my Far Isles Half-Elven, I just wrote this huge 400,000 page manuscript and realized I had a couple novels in there if I ever get the drafts revised and edited. My approach to stories in my Andor world has been the opposite. While I have novel-length notes in my computer, I’m writing short stories and novelettes about different characters experiences after the end of the Celestial Wars, when invaders from alternate universes tried to colonize Andor. I’m currently drafting a new novella set in Andor. 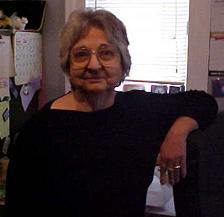 Hooked by comic books at an early age, M. K. Theodoratus’ fascination with fantasy solidified when she discovered the Oz books by L. Frank Baum with his strong female characters. She has traveled through many fantasy worlds since then.

A sixth grade English assignment started her writing. The teacher assigned a short story. Theodoratus gave her an incomplete, 25-page Nancy Drew pastiche which turned into a full novel by the next summer. She’s been writing happily ever after ever since.

When she’s not reading about other writer’s worlds, she’s creating her own. Most of her tales are set in the land of Andor where magic and demons clash with ordinary humans caught in the middle. She also writes in the world of the Far Isles Half-Elven where she explores the political effects of genetic drift on a mixed elf-human population.

Gargoyles, magic, ghosts, demons, and other magical beings are open game for Theodoratus. You can learn more about her writing at her author website: http://www.mktheodoratus.com.