This blog tour runs from 13 till 26 February. Review copies are available in eformats through Bookfunnel.

Blurb:
Shocking and brutal true crimes against innocent victims who deserve to have their stories remembered.

A true crime anthology of 20 stories, Killer Case Files delivers gripping accounts of depraved and horrifying murders. These killers can range from seemingly normal people to psychopaths and serial killers who commit years of murder and mayhem.

Follow law enforcement as they use forensic science and old school detective skills to identify and apprehend these violent criminals, deviant predators, and serial killers.

20 Shocking Stories in Each Volume

Volume 4 includes . . .
◆ Death in the Desert: A girl walking to high school in Las Vegas was found dead after being viciously sexually assaulted. The case went cold for thirty two years until a local philanthropist donated $5,000 to a company specializing in DNA genomics – stipulating that it be used on a cold case. Soon, not one, but two murders were solved.
◆ A Nun Killer: In 1981 an elderly nun was murdered in her bedroom. In 1992 a young man was executed for her murder. That much is certain. What is not certain is whether the convicted and executed man was really guilty.
◆ Just a Drifter: When a twenty-two year old woman goes missing while walking her dog it doesn’t take long for solid clues to lead to a senior citizen who is a drifter. But police can’t help wondering whether a drifter in his sixties has finally committed his first murder, or whether he’s previously committed several others.
◆ Washington Axe Murderer: A beautiful area of Seattle, popular with both locals and tourists, had its residents living in fear during the summer of 1990 as an axe murderer stalked the neighborhood and left terrifying messages inside homes.

Each volume in this series includes a 21st bonus chapter and additional supporting Case Files from every story – available free at the author’s website, where readers can join the author to dive further into additional photos, news reports and disturbing specifics of each case.

A Word of Warning
The explicit details of these murders come directly from eyewitness accounts, interviews, police reports, court transcripts, crime scenes, and autopsy reports. They contain disturbing facts that may not be for everyone.

She is the author of Killer Case Files: Jamie Malton’s Best True Crime Series which is an anthology of crime stories where the author examines the homicides perpetrated by murderers and serial killers.

Drawn to the how and why of real crime stories and fascinated by the detailed police work, DNA reconstruction, and genetic genealogy, she started writing her books to share the details of these stories with her readers.

For book research, she splits her time between American and European destinations where she often visits some of the places where crimes have occurred.

With criminal apprehension and victim restitution as a personal cause, she donates a portion of her book sales to charities that fund DNA reconstruction to solve cold cases and charities that support the families of murdered victims.

You can reach her at JamieMalton.com where she curates her research into Case Files for her readers who want to dive deeper into any case in her books. 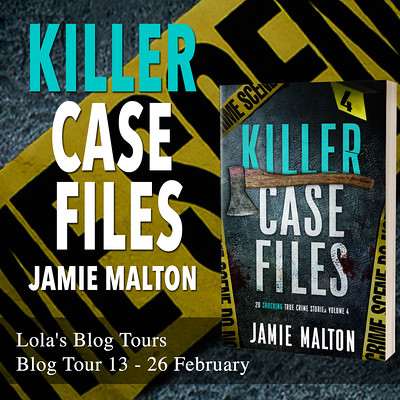