I am organizing a book blitz for Let It Be Me by Laura Chapman. The book blitz runs from 21 till 27 October. There is a giveaway during the tour.

Review copies are available in e-formats for reviewers during the tour and within two months of the tour. While this is book 2 in the series, it can be read as a standalone. This book follows a different couple than book 1.

Blurb:
Who says history is boring?

Professor James Mitchell has a rock star reputation. With a waitlist for all his classes, a best-selling book, and the requisite leather jacket, the university and publisher are eager to capitalize on this British sensation. But after his girlfriend leaves him for another man, James goes from rising scholar to spiraling bad boy. Forget contracts and tenure, James wants out—of his job, his book deal, and, better still, the country. He’s well on his way when his boss’s daughter walks into his favorite bar . . .

Aspiring filmmaker Ali Ferguson-Day doesn’t scare easily. She’s been given the means to make a film of her own—on the condition she tames the professor. As the daughter of a famed documentarian and a renowned historian, she’s more than ready to step out of her parents’ shadows and shine on her own. She won’t let anyone—not even an unexpected charmer—get in her way.

James and Ali butt heads from the start, but it isn’t long before their sparring gives way to attraction. There’s the promise of even more, if they can get past the fear of history repeating itself to let love in . . .

You can find Let It Be Me on Goodreads

Check out book 1 in this series: Counting on You 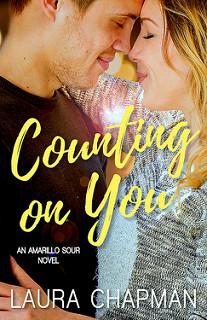 Is love worth the risk?

Laura Chapman is the award-winning and Amazon best-selling author of sweet and sexy romantic comedies. A born and raised Nebraska girl, she loves watching football, traveling, crafting, and baking. When she isn’t writing her next story, she is probably working at a museum by day and binge-watching Netflix with her cats Jane and Bingley at night. So, basically, she’s living large.

24 October
An Eye For Romance – Excerpt

There is a tour wide giveaway for the book blitz of Let It Be Me. One winner will win a $20 Amazon gift card.