I am organizing a book blitz for Saven: Deception (The Saven Series #1) by Siobhan Davis. The book blitz runs from 30 March till 5 April. There will be a tour wide giveaway for a kindle! 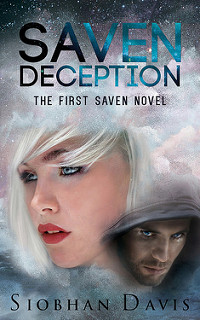 Blurb:
I’ve fallen hard for an alien, but he’s harboring secrets.
Massive secrets that threaten the very essence of humanity.
How can I give him my heart when his race plans on taking my future?

Sadie Owens has been slowly dying inside. Bit by bit, piece by piece, day by day. Trapped in a life she hates, she relies on only one person—herself.

Despised by her family and betrayed by an unscrupulous government, Sadie dreams of a different life. When she is chosen to participate in the government’s new social experiment, she is ecstatic at the prospect of spending six months in Thalassic City, the shiny new city under the sea.

Immediately drawn to Logan Chandler, Sadie is captivated by the beautiful boy with the ocean-blue eyes. Logan seems to embody everything that has been forbidden, but he isn’t all he appears to be.

Confused over Logan’s true intentions and concerned when best friend Jenna starts transforming in front of her eyes, Sadie partners with newcomer Jarod in a bid to uncover the government’s real agenda. The truth is more shocking than anything she could ever have imagined.

When Sadie finally understands why the Saven walk among us, will it be too late to save her heart and the human race?

You can find Saven: Deception on Goodreads

Siobhan Davis writes young adult science fiction fantasy romance books, and she is the author of the Amazon bestselling True Calling series. The first book in her new Saven series was released in December 2015.

Before pursuing a full-time writing career, Siobhan forged a successful corporate career in Human Resources over the last twenty years. She resides in the Garden County of Ireland with her husband and two sons.

There is a tour wide giveaway for the book blitz of Saven: Deception. Open International. Below are the prizes you can win:
– a kindle e-reader
– The Complete Lux Series by Jennifer L. Armentrout
– Signed paperbacks of Saven Deception and Saven Disclosure by Siobhan Davis