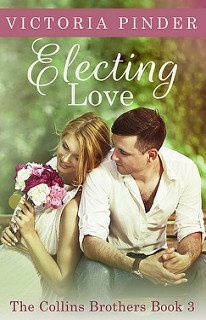 Blurb:
Gerard Collins is running in the election for Massachusetts U.S. Senator. He put his name on the ballot to help his FBI agent brother crack a crime family. But the masquerade gets more complicated when his Campaign Manager insists that he’s going to need a political wife.

Movie star Nicole Burns aka Nicole Wyland makes millions staring in romantic comedies, yet she’s never been in love. She left Cape Cod to escape her family and sought to pretend to be anyone else other than Nicole Burns. She goes back home to figure out who she is.

When she saw Gerard Collins was running for office, she intended to confront him over his part in her sister’s mental breakdown. But sparks fly and helping him win is far more interesting to her, and her sister’s complicated past stops becoming a barrier to romance. He’s nothing like what she thought, and the fake engagement is becoming excitingly more real the longer she stays.

You can find Electing Love on Goodreads 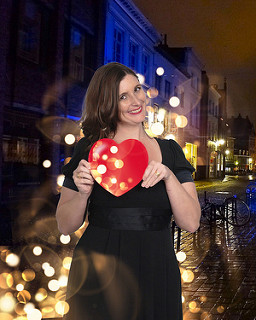 Victoria Pinder grew up in Irish Catholic Boston before moving to the Miami sun. She’s worked in engineering, after passing many tests proving how easy Math came to her. Then hating her life at the age of twenty four, she decided to go to law school. Four years later, after passing the bar and practicing very little, she realized that she hates the practice of law. She refused to one day turn 50 and realize she had nothing but her career and hours at a desk. After realizing she needed change, she became a high school teacher. Teaching is rewarding, but writing is a passion.

During all this time, she always wrote stories to entertain herself or calm down. Her parents are practical minded people demanding a job, and Victoria spent too many years living other people’s dreams, but when she sat down to see what skill she had that matched what she enjoyed doing, writing became so obvious. The middle school year book when someone wrote in it that one day she’d be a writer made sense when she turned thirty.

She’s always been amazing, adventurous and assured. It’s what gets her through the day.

Her website is www.victoriapinder.com. Please write as she loves writing back to her fans.

There is a cover reveal wide giveaway for the cover reveal of Electing Love. One winner will win a 5$ amazon gift card (US only).