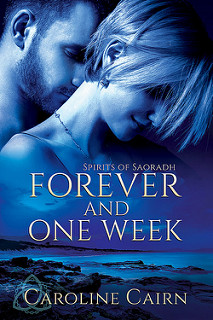 Blurb:
The Spirits of Saoradh, who carry the guilt of a crime they committed when they were alive, now spend their ghostly days in the Void, dark nothingness where time and space are distorted. Until they get bound to a human. As often as needed, that human can call them to the real world, ask them to grant a wish, then send them back to the Void. The Spirits also have to follow strict rules or be punished, unaware that they can earn their redemption through a selfless sacrifice.

Spirit Logan despises the obedience he has to show to his humans, and prefers the enjoyable solitude of the Void. For three years, he has managed to threaten them into severing their bond, thus having his memory wiped of their existence. Except his latest human, an emotionless woman with a secret past, isn’t scared of him. Worse, she doesn’t care about his ability to make wishes come true.

Tessa, a twenty-six-year-old nursery teacher in Fort William, Scotland, doesn’t expect a sullen ghost only she can see and touch to burst through her solid defences. Both dismayed and intrigued, she offers Logan a deal he can’t refuse: to live with her in the human world for one week, at the end of which she will agree to release him.

Slowly, Tessa braves through the safety of her detachment towards people to show Logan some kindness. But the more her feelings deepen, the more Logan increases his distance…

You can find Forever and One Week on Goodreads

Born and raised in France, Caroline Cairn studied hotel management before spending a couple of years in England, Ireland and Belgium. In 2001, she and her husband settled close to the Loch Ness monster in the Highlands of Scotland, and soon, two children and about thirteen fish joined them.
Dramatic scenes are still her favourite to work on, which is perhaps a reminiscence of her teenage years when every single ones of her stories had to end in epic tragedy (Shakespeare had nothing on her).
Thankfully, these days, she veers towards the happy-ever-after finale in a glorious orange and red sunset.