I am organizing a cover reveal for Humanity’s Hope by Pembroke Sinclair. This cover reveal will take place on 17 February. 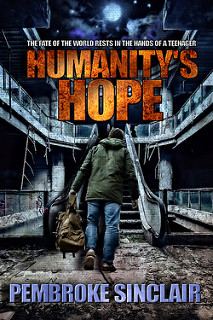 Blurb:
Caleb, a 17-year-old boy, survived the zombie uprising, but he didn’t come out of the ordeal unscathed. He’s been scarred—both mentally and physically. The rest of humanity is trying to rebuild, to make the world normal again. Caleb is trying to return to a normal life also, but after all he’s seen, after the loss of his family and friends, the transition is difficult. The darkness that led him down a path of self-doubt and self-harm keeps trying to creep back into his mind.

Things only become worse when he discovers he’s immune to whatever makes a zombie a zombie. Fighting zombies was predictable. He knew what to expect. Fighting humans is volatile. They are malicious and treacherous. They won’t stop to get what they want, and Caleb has to figure out exactly what that is.

You can find Humanity’s Hope on Goodreads

I am an editor by day and a zombie-killer by night (at least in my books). Since the first time I watched Night of the Living Dead, I have been obsessed with zombies and I often think of ways to survive the uprising.

I have written YA novels about zombies and the tough teens who survive the apocalyptic world, along with adult novels in the sci fi and fantasy genres. I have also written kids’ books under the pen name J.D. Pooker.

I have written nonfiction stories for Serial Killer Magazine and published a book about slasher films called Life Lessons from Slasher Films under my real name.

Pippa Jay
Books of Love
Reading for the Stars and Moon
TMBA Corbett Tries to Write
I read too much!
Kara the Redhead
Diana’s Book Reviews
Rambling Reviews
YA Book Divas
Sylv all about books
Binding Addiction
I Love To Read
Leila Tualla’s Bookshelf
The Book Adventures of Annelise Lestrange