Blurb:
Get immersed in the Nogiku world with Jiro Itō as he gets ready for a boring and annoying New Year’s Eve out in Nishikyō. At least, that’s what he expects his night to be like. Jiro would rather drink with the geisha all evening, and avoid taking anyone home, but he has family business to attend to instead. When the family business leads to an unfamiliar restaurant, Jiro spies Sanaa Griffin smiling at him from across the room, and his night turns around.

But Mark Sakai, his uncle, is not pleased with Jiro’s flirtations. Mark has worked hard for over a decade to get Sanaa into position for her new life, and he can’t have Jiro interfering. Will a stern warning be enough to keep them apart?

PART ONE of REVEALED is a companion short story to REMOVED, Book ONE of the Nogiku Series. The first chapter of REMOVED is included at the end of PART ONE. Read REVEALED first or read it later, but don’t miss this look into the other side of Sanaa’s story.

You can find Revealed: Part One: New Year’s Eve with Jiro and Mark on Goodreads 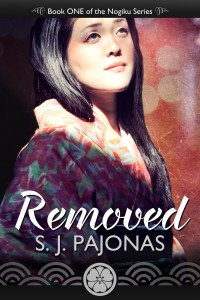 Blurb:
Duty knows no family. Love has no price. Secrets can cost you everything.

Twenty-year-old Sanaa Griffin is about to get more than she bargained for when she wishes for love, happiness, and excitement on New Year’s Eve. Ripped from the job she always loved, she is reassigned to work for mysterious Mark Sakai and spy on the corrupt leaders of her city. War looms on the horizon, and Sanaa must help Sakai determine the key players and their weak spots before it’s too late.

Mark Sakai has many plans for Sanaa that will take her into a web of lies and danger, and her only protection is to learn to defend herself. But defense training under the watchful eye of Jiro, a strong and enigmatic young man she has a crush on, was not what she expected. Between falling in love with Jiro and the information she is gathering, Sanaa realizes Sakai is holding back secrets about her family and her deceased parents, secrets as to why she was chosen for this job, and learning the truth puts all of humanity in jeopardy.

REMOVED is the first book in a captivating post-apocalyptic series that harnesses the cultures and traditions of Japan and sweeps them into the future between Earth and a faraway land.

You can find Removed on Goodreads
Want to view some inspirational images for Removed, visit the Removed inspirational Pinterest board

Blurb:
Left in the desert to recuperate from her injuries, Sanaa Itami paces the floors and contemplates her mistakes. She trusted too easily, and now people she loved are dead, killed at the hands of men coming to assassinate her. Sanaa feels beaten, but life awaits her at home. While her city recovers from the devastating earthquake, negotiations for Sanaa’s future continue. New allies must be made, new friendships brokered, new skills acquired — at all costs.

Life at the top of the chain is complicated and lonely, though. With all her friendships rocky and uncertain, Sanaa must learn to trust others again more than she’s willing. Who is left holding a grudge? And will the new family Sanaa has found with Jiro support or betray her?

RELEASED, Book TWO of the Nogiku Series, is the second book in a captivating post-apocalyptic romance series that harnesses the cultures and traditions of Japan and sweeps them into the future between Earth and a faraway land.

Blurb:
Yūsei has surprises for Sanaa Itami. The long trip across the stars ends with Mark Sakai delivering bad news from orbit over their new home, and there’s no turning back or moving on. Despite all their misgivings, this is where they will have to stay.

Sanaa, Jiro, and the rest of Earth’s settlers move into a coastal town and stick to their plans to live the colonization life they dreamed of. But Sanaa’s existence won’t be kept secret from her enemies for long. Kazuo promised he would see her in another life, on another world, and he aims to keep his word. Now she will face those who want their revenge and make new enemies while dispensing with old ones on her journey across the fascinating and unfamiliar landscape of Yūsei.

REUNITED, Book THREE of the Nogiku Series, is the third book in a captivating post-apocalyptic romance series that harnesses the cultures and traditions of Japan and sweeps them into the future between Earth and a faraway land.

You can find Reunited on Goodreads

S. J. Pajonas loves all things Asian and has been in love with Japan and the East for as long as she can remember. Writing about Asia and Japan came naturally after studying the culture and language for over fifteen years. She studied film and screenwriting first and eventually segued into fiction once she was no longer working a full-time job.

Face Time is the first novel in the Love in the Digital Age series, and Pajonas’s first foray into Korean culture and families. Along with Removed and Released in the Nogiku Series, she continues to take the cultures of Asia and weave them into stories that appeal to people from around the world. Her writing is described as unique and unpredictable. Expect the unexpected.

Stephanie lives with her husband and two children just outside of New York City. She loves reading, writing, film, J- and K-dramas, knitting, and astrology. Her favorite author is Haruki Murakami and favorite book is The Wind-up Bird Chronicle.