I am organizing a review opportunity for Who Let the Demon Out? by Naomi Bellina. I have review copies available in e-formats as well as a few paperback copies (US Only). There is no deadline before when you have to review this one.

Who Let the Demon Out? is a Darkly Funny Urban Fantasy and the first book in the Badass Demon Bounty Hunters series. 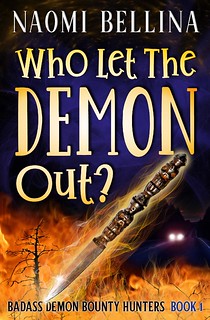 Blurb:
How hard can it be to send an escaped demon back to hell?

Not only is her suicide attempt thwarted by a stranger, but when she comes back from the dead, Sable is tasked by Lucifer to find and return to hell a demon she let loose. If she doesn’t, she’ll be sent to the darkest level of the afterlife when she dies.

The woman Jack pulled from a running car is obviously disturbed and her story about Lucifer and demons is bullshit. But she has the name of a dead man written on her arm and Jack wants to know why.

Since it’s Jack’s fault she’s in this mess and his skills from a background in the security business are useful, Sable recruits him for her find-the-demon mission, which turns out to be all kinds of difficult. Not only can demons inhabit human bodies, they have other nasty tricks up their sleeves, like incinerating objects and people who get in their way.

It also turns out the inhabitants of hell lie and that things on Earth are not what they appear. Nor are things in her own world, Sable discovers, as she battles to complete her mission before time runs out and it’s impossible to send the demon back.

You can find Who Let the Demon Out? on Goodreads

Naomi Bellina lives in sunny Florida with the love of her life and the world’s chattiest cat. Her interests include dancing, motorcycle riding, drumming and eavesdropping on strangers’ conversations for plot ideas. She used to worry about the battles between her cheery disposition and her dark imagination, but now they’re best friends and drink coffee and write books together. Her motto: Never pass up the opportunity to have an adventure!