I am organizing a blog tour for Boondocks by Jaydeeb Shah. This is the first book in an apocalyptic thriller series.

This tour runs from 13 till 26 June. Review copies are available in eformats and will be ready later this month. 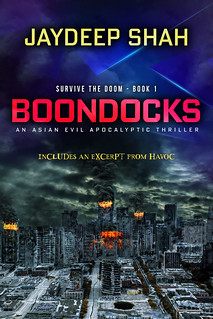 Blurb:
They believe it is only about defeat and escape.
Little do they know; it is something more than that. It is about the rise of the dead and the world’s destruction.

Lost in the desert of Rajasthan, India, Rahul and Elisa learn the truth about a wicked wizard named Dansh and some enchanters performing resurrection rituals.

Though they try to stop him, Dansh knows black magic and they find him a challenging adversary. Even worse than him, Rahul and Elisa soon discover that the churel named Dali has returned. Soon, the King of the Underworld, an immortal rakshasa named Sekiada, will make his way to the earth with the force of his thousands of fallen angels to conquer the world.
Rahul and Elisa must find a way to stop them and save humanity.

Terror inflames the nation. The country’s best commando, Aarav Singh, and the best local police officer, Arjun Rawat, reach the city’s border near the desert with the force of gifted soldiers to commence battle against evil. They turn the border into a battlefield to prevent the demons from entering the city.

The apocalypse is struggling to reach its highest peak as the Asian evils slowly spread across the nation: churels, rakshasas, pishachas, daayans, shaitans, and many more hair-raising bloodshed lovers.

Rahul must find a way to murder the immortals: the wicked wizard, the king of the Underworld, and the strongest churel of all time, and Elisa must gather her own courage to battle the demons, especially one of the immortals, to prove women are not weak.

Welcome to the world of horror, where the characters play games of deceit and betrayal to achieve their goals, and the demons enjoy slaughtering the humans.

The end is near. Or it’s just the beginning!? Dare to witness the apocalypse, but only if you are comfortable with bloodbath and barbarity.

Jaydeep Shah is an avid traveler and a multi-genre author. As a bachelor’s degree holder in Creative Writing, he aims to entertain as many as people he can with his stories. He is best known for Tribulation, the first book in the “Cops Planet” series.

In addition to those books, The Shape-Shifting Serpents’ Choice, Jaydeep’s first young adult flash fiction written under his pen name, JD Shah, is published online by Scarlet Leaf Review in their July 2019 issue. Currently, he’s endeavoring to write a debut young adult fantasy novel while working on a sequel to his first apocalyptic thriller, Havoc.

When Shah is not writing, he reads books, tries new restaurants, and goes on adventures. 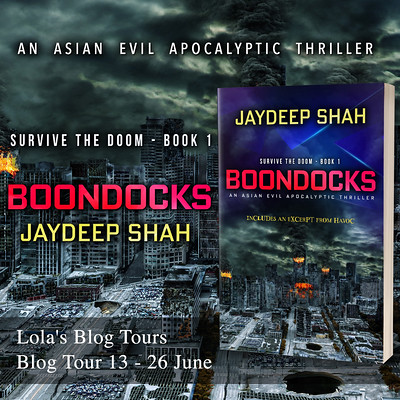