I am organizing a cover reveal for Big Flipping Deal by Ian Saul Whitcomb. This cover reveal will take place on 7 November. There will be a giveaway. 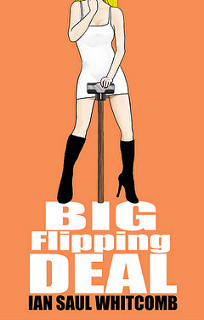 Blurb:
When the sweet little old lady down the road dies and leaves Nick half ownership of her house, he really has no idea what he’s getting into. His co-owner, Lindsey, gives every appearance of being Nick’s dream girl … smart, talented, funny, and drop-dead gorgeous.

But Lindsey has a secret.

And when Nick finds out, his fantasies of dream-girl romance get turned upside-down.

He’s already signed on to remodel the house with Lindsey and flip it for a big profit. They’re going to be in constant, almost daily contact. She’s absolutely perfect in every way but one. Only that one is a doozy.

Will Nick be able to make things work with a woman whose equipment isn’t what he expected?

Will Lindsey open up after a lifetime of misunderstandings and bigotry?

Is this house flip headed for a happy ending … or a wrecking ball?

You can find Big Flipping Deal on Goodreads

Get the other books by this author for only 0.99!
During the release week for Big Flipping Deal, from November 7 till November 13, Ian his other books will all be discounted to 0.99$! Get Gloria’s Daughter, Contrast and Sexpossessed for only 99 cents each!

Ian Saul Whitcomb lives in a state of bewilderment and anxiety about the shape of the world, which leads him to invest copious time writing differently shaped stories to soothe his agitated nerves. He can also be found blogging sporadically at bigheartednarcissist.blogspot.com and Twittering by the handle @coolgasmic. Hearing from readers never fails to make his day, whether in the form of blog comments, tweets, or the Holy Grail of reader feedback, Amazon reviews.

For a chance to win, enter the giveaway below:
a Rafflecopter giveaway