I am organizing a cover reveal for Scandal by Athena Grayson. This cover reveal will take place on March 23. The cover is designed by Jennette Marie Powell. There will be a giveaway during the cover reveal. 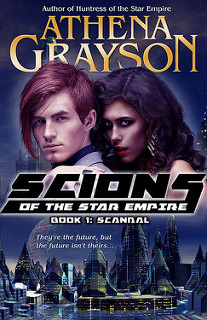 Blurb:
Nothing infuriates Princess Ione Ra more than having someone else take control of her reputation from her, and her old nemesis–gossip journalist Jaris Pulne–is poised to do just that with pilfered pics of her caught in a compromising position with her power-couple partner. As someone who’s no stranger to manipulating the markets on her own social life, Ione knows the wrong scandal means social suicide.

For the other half of the power couple, Den Hades, his survival has depended on staying in his powerful father’s shadow in order to protect his secrets. But on the very night of his one chance to earn a shot at becoming a Scion–and freedom from his father’s ambitions, scandal threatens to tear him from Ione, or worse–force them together before their time.

Damage control turns into danger when their attempts to retrieve the images lead them both into the dark underbelly of the glittering city-planet, exposing secrets of both friends and foes that could lead to more than just social suicide.

Scandal is only 0.99$ for a limited time!
You can pre-order Scandal on Amazon.
You can find all the buy links for this book here.

Series Blurb for Scions of the Star Empire:

They can have anything they want…except a future.

The children of Landfall’s powerful nobility have all the wealth and privilege of their family status, but there’s only one thing that will give them true freedom–the title of Scion. The only way to earn it is by carefully managing the social influence markets that rank them according to their accomplishments. At the exclusive Landfall Cultural Academy, the heirs compete to elevate their status high enough for the Cultural Trust to grant them the title and the freedom to make their own way, and scandal is as good as scholarship.

Athena Grayson likes kickass heroines, big-brained and sexy beta heroes who aren’t afraid of strong women or their own feelings, and stories that turn the genre tropes sideways. If you’re looking for something a little unexpected, a little more, and a lot of fun…this is your kinda place.

There is a cover reveal wide giveaway for the cover reveal of Scandal. The giveaway is open international. These are the prizes you can win:
– a galaxy pendant (picture below)
– a $5 Amazon gift card 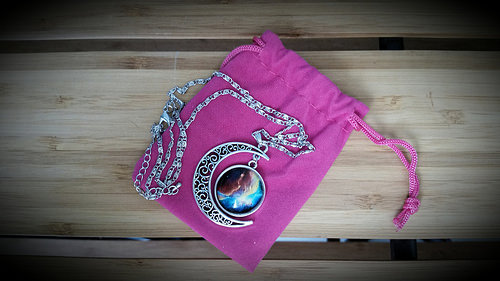